According to Holy Tradition, the Entry of the Most Holy Theotokos into the Temple took place in the following manner. The parents of the Virgin Mary, Saints Joachim and Anna, praying for an end to their childlessness, vowed that if a child were born to them, they would dedicate it to the service of God.

When the Most Holy Virgin reached the age of three, the holy parents decided to fulfill their vow. They gathered together their relatives and acquaintances, and dressed the All-Pure Virgin in Her finest clothes. Singing sacred songs and with lighted candles in their hands, virgins escorted Her to the Temple (Ps. 44/45:14-15). There the High Priest and several priests met the handmaiden of God. In the Temple, fifteen high steps led to the sanctuary, which only the priests and High Priest could enter. (Because they recited a Psalm on each step, Psalms 119/120-133/134 are called “Psalms of Ascent.”) The child Mary, so it seemed, could not make it up this stairway. But just as they placed Her on the first step, strengthened by the power of God, She quickly went up the remaining steps and ascended to the highest one. Then the High Priest, through inspiration from above, led the Most Holy Virgin into the Holy of Holies, where only the High Priest entered once a year to offer a purifying sacrifice of blood. Therefore, all those present in the Temple were astonished at this most unusual occurrence.

After entrusting their child to the Heavenly Father, Joachim and Anna returned home. The All-Holy Virgin remained in the quarters for virgins near the Temple. According to the testimony of Holy Scripture (Exodus 38; 1 Kings 1: 28; Luke 2: 37), and also the historian Josephus Flavius, there were many living quarters around the Temple, in which those who were dedicated to the service of God dwelt.

The earthly life of the Most Holy Theotokos from Her infancy until She was taken up to Heaven is shrouded in deep mystery. Her life at the Jerusalem Temple was also a secret. “If anyone were to ask me,” said Saint Jerome, “how the Most Holy Virgin spent the time of Her youth, I would answer that that is known to God Himself and the Archangel Gabriel, Her constant guardian.”

But there are accounts in Church Tradition, that during the All-Pure Virgin’s stay at the Temple, She grew up in a community of pious virgins, diligently read the Holy Scripture, occupied Herself with handicrafts, prayed constantly, and grew in love for God. From ancient times, the Church has celebrated the Feast of the Entry of the Most Holy Theotokos into the Temple.

An official named Antiochus denounced them to the emperor Hadrian (117-138), who ordered that they be brought to Rome. Realizing that they would be taken before the emperor, the holy virgins prayed fervently to the Lord Jesus Christ, asking that He give them the strength not to fear torture and death. When the holy virgins and their mother came before the emperor, everyone present was amazed at their composure. They looked as though they had been brought to some happy festival, rather than to torture. Summoning each of the sisters in turn, Hadrian urged them to offer sacrifice to the goddess Artemis. The young girls remained unyielding.

Then the emperor ordered them to be tortured. They burned the holy virgins over an iron grating, then threw them into a red-hot oven, and finally into a cauldron with boiling tar, but the Lord preserved them.

The youngest child, Love, was tied to a wheel and they beat her with rods until her body was covered all over with bloody welts. After undergoing unspeakable torments, the holy virgins glorified their Heavenly Bridegroom and remained steadfast in the Faith.

They subjected Saint Sophia to another grievous torture: the mother was forced to watch the suffering of her daughters. She displayed adamant courage, and urged her daughters to endure their torments for the sake of the Heavenly Bridegroom. All three maidens were beheaded, and joyfully bent their necks beneath the sword.

In order to intensify Saint Sophia’s inner suffering, the emperor permitted her to take the bodies of her daughters. She placed their remains in coffins and loaded them on a wagon. She drove beyond the city limits and reverently buried them on a high hill. Saint Sophia sat there by the graves of her daughters for three days, and finally she gave up her soul to the Lord. Even though she did not suffer for Christ in the flesh, she was not deprived of a martyr’s crown. Instead, she suffered in her heart. Believers buried her body there beside her daughters.

The relics of the holy martyrs have rested at El’zasa, in the church of Esho since the year 777. 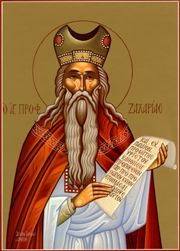 According to the opinion of many Fathers of the Church, based on an ancient tradition, this is the Zacharias whom, as our Lord said, the Jews slew between the temple and the altar (Matt. 23:35), first, because even after the Virgin Mary gave birth, he continued to refer to her as virgin and number her among the virgins; second, because Zacharias' son John was not found during the slaughter of the Innocents, since the elderly Elizabeth had taken him and carefully hid him while he was yet an infant, in an unnamed place somewhere in the desert, where, according to the Evangelist, "the child grew, and waxed strong in spirit, and was in the deserts till the day of his showing unto Israel" (Luke 1:80). When the child was not found, his father was slain by Herod's command.

Irene the Righteous of Chrysovalantou 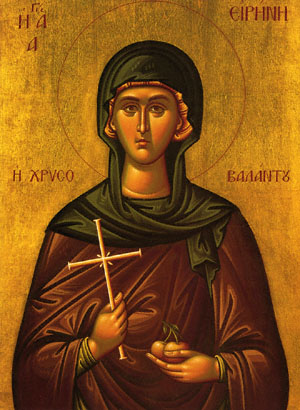 Saint Irene, who was from Cappadocia, flourished in the ninth century. Because of her great beauty and virtue, she was brought to Constantinople as a prospective bride for the young Emperor Michael (842-867); however, as Saint Joannicius the Great foretold, it was God's will that she assume the monastic habit instead. She shone forth in great ascetical labours, and suffered many attacks from the demons; while yet a novice, she attained to the practice of Saint Arsenius the Great, of praying the whole night long with arms stretched out towards Heaven (see May 8). God showed forth great signs and wonders in her, and she became the Abbess of the Convent of Chrysovalantou. She was granted the gift of clairvoyance and knew the thoughts of all that came to her. She appeared in a vision to the king and rebuked him for unjustly imprisoning a nobleman who had been falsely accused. Through a sailor from Patmos to whom he had appeared, Saint John the Evangelist sent her fragrant and wondrous apples from Paradise. She reposed at the age of 103, still retaining the youthful beauty of her countenance. After her repose, marvelous healings beyond number have been wrought by her to the presence

One of the myrrh-bearing women and equal to the apostles, Mary was born in the town of Magdala, along the shore of Lake Gennesaret, of the tribe of Issacher. She was tormented by seven evil spirits – from which she was freed by the Lord Jesus and made whole. She was a faithful follower and servant of the Lord during His earthly life. She stood beneath the Cross on Golgotha, and grieved bitterly with the All-holy Theotokos. After the death of the Lord she visited His sepulcher three times. When the Lord rose again she saw Him on two occasions: once by herself, and once with the other myrrh-bearing women. She traveled to Rome and appeared before Tiberias Ceasar, presenting him with a red egg, and giving him the salutation: “Christ is Risen!” She also denounced Pontius Pilate to Caesar for his unjust condemnation of the Lord Jesus. Caesar accepted her accusation, and transferred Pilate from Jerusalem to Gaul where, in disfavor with the emperor, this unjust judge died of a dread disease. After this, she returned from Rome to Ephesus, to assist St. John the Theologian in the work of preaching the Gospel. With great love toward the resurrected Lord, with great zeal for the Faith and as a true apostle of Christ, she proclaimed the Holy Gospel to the world. She died peacefully in Ephesus. According to tradition, the cave she was buried in was the same cave in which the Seven Youths (August 4) later slept a wondrous sleep for hundreds of years, then came to life and again died. The relics of St. Mary Magdalene were later transferred to Constantinople. There is a beautiful Russian Orthodox convent dedicated to St. Mary Magdalene near the Garden of Gethsemane.